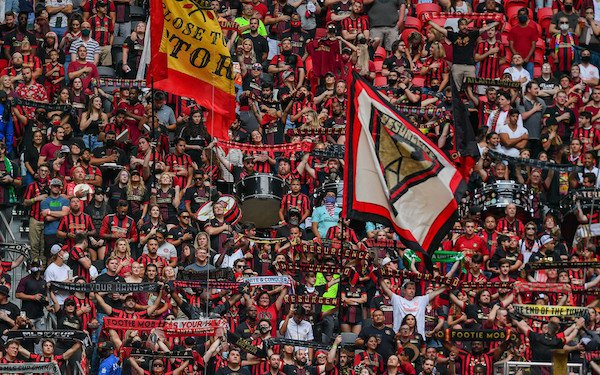 It's been an underwhelming start to the 2021 season for Atlanta United under new head coach Gabriel Heinze:

-- One win and just three goals scored in its first four games; and
-- A quarterfinal exit to MLS Eastern Conference rival Philadelphia in the Concacaf Champions League marked by a 3-0 loss at home in the first leg, its worst ever home defeat in its five seasons.

But the Five Stripes find themselves in a five-way share of the Eastern Conference lead after their 1-0 win over CF Montreal on Marcelino Moreno's goal in the fourth minute of stoppage time.

The Atlanta United attack, again missing the injured Ezequiel Barco, continued to struggle, putting only one shot on target until Moreno's winner on a header from the penalty spot off Jake Mulraney's cross.

The game drew 40,116 fans at Mercedes-Benz Stadium the largest crowd for a soccer match in the world since the COVID-19 pandemic began.

“It’s beautiful to see so many people in the stadium,” said Heinze. “Football is for the people. I’m very happy because the players gave everything to get the win.”

Aaron Long, the only MLS player currently projected to be a starter on U.S. national team, had to be helped off the field following the New York Red Bulls' 1-0 loss at the Philadelphia Union.

The 2018 MLS Defender of the Year came down on his right foot after jumping in the air late in stoppage time. He could not put any weight on his foot, suggesting he suffered an Achilles injury or ankle injury. There was no word from the Red Bulls after the game on the extent of the injury.

The USA faces a busy schedule with four games over 12 days, beginning with a friendly against Switzerland on May 29.

The Portland Timbers earned a 2-0 victory at the San Jose Earthquakes, getting a shutout performance from goalkeeper Logan Ketterer, who made his MLS debut on loan from the USL's El Paso Locomotive.

Ketterer was the fourth different starting goalkeeper for the Timbers this season. His evening was highlighted by a penalty save on Chris Wondolowski in the 62nd minute.

The 27-year-old Wisconsin native was signed after the Timbers were granted MLS’s Extreme Hardship waiver following the loss of keepers Steve Clark (thigh strain in the season opener) and Jeff Attinella (season-ending ruptured right quad in last week's 2-1 loss to Seattle). They had also lost Aljaz Ivacic with hernia surgery at the end of preseason. The only other available keeper was 19-year-old Hunter Sulte, who started two games.

“It’s not easy to come in for a match like this and have to deliver,” coach Giovanni Savarese said of Ketterer. “He not only delivered, but he was also able to be very influential in so many ways — the way he saved the PK, first of all. It was his belief that today was going to be our day, and in the way we play, and him having confidence with the ball and making sure he did the things we asked him to do in playing from the back.”
mls
Next story loading