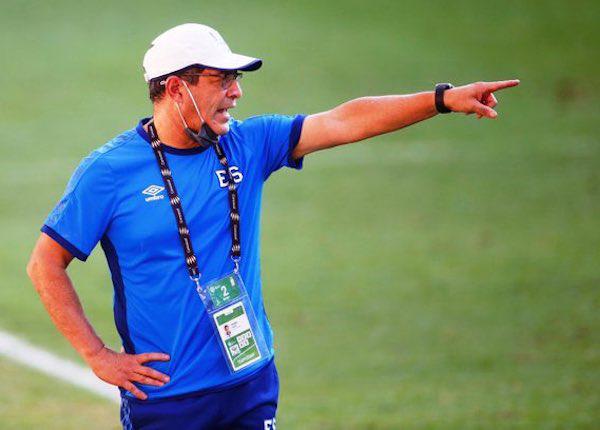 As El Salvador faces the USA to open the final group games for Concacaf World Cup qualifying, Coach Hugo Perez  is looking for redemption. Not just for El Salvador, the country of his birth, but also for himself and his players, many of whom feel overlooked, as he once did, by the country where they were born, the United States.

“It happened to me, so I can identify with that,” Perez said of Salvadoran-American dual-nationals feeling particularly motivated to prove themselves against the USA.

Perez, who immigrated to the USA at 11 years of age, was not called in by El Salvador as a young player before deciding to play for the USA. As a U.S. youth national team program technical advisor and coach, he had a successful tenure with the U-14s and U-15s in 2012-2014, but has not coached for U.S. Soccer since that time.

“We have to be up front with all the families,” Perez explained about dealing with players who have different national team options. “We’re not Mexico, we’re not the USA, but we’re going to do the best we can to treat [our players] fairly, properly and honestly. We want them to understand our philosophy and how we want to play. Then after that, it comes down to them and their families and the decision they want to make. But we want to make sure that they understand that we do care for them.”

His experience makes Perez the ideal liaison for integrating the new players into La Selecta, whose quest to return to the World Cup for the first time since 1982 continues when it opens Concacaf Octagonal play by hosting the USA on Thursday.

“I live in both worlds because I’m from [El Salvador] and I live in the U.S.” said Perez. “Those new players have made an impact, in how they train, in how they play. It’s been a good mix of the foreigners and the nationals. They’ve been very good with their attitude. That has helped a lot. They’ve behaved like true professional athletes and that’s helped all the players.”

Qualifying a national team to the World Cup after a long absence from reaching that level is a challenge Perez has successfully experienced before, when he was a player.

“It had been 40 years since the United States competed in a World Cup, when we qualified in 1990,” recalled Perez, who made key contributions in qualifying play but was controversially left off the final World Cup roster by Coach Bob Gansler. “In ‘90, most of the players were college kids. Only about three or four of us were pros playing outside the country. It shows that when you’re mentally and psychologically strong, things can happen. When you’re hungry, a lot of good things will happen.”

Hugo Perez, who played for the USA at the 1984 Olympics, during successful 1988 Olympic qualifying, and at 1994 World Cup, helped the USA qualify for the 1990 World Cup despite limited to two appearances because of injury. Perez's gamewinner over El Salvador was one of only two U.S. away goals, the other being Paul Caligiuri's at Trinidad & Tobago. To reach the final round of qualifying, with Coach Lothar Osiander at the helm, the USA faced Jamaica in a two-leg series. After a scoreless tie in Kingston, early elimination threatened the USA as it was tied 1-1 with 22 minutes left. Perez, who had energized the U.S. attack after coming on at halftime, converted a penalty kick after he was fouled to make it 2-1 and the USA went on to a 5-1 win.

The parallels between the USA back then and El Salvador now are clear to Perez.

“Next year, it will be 40 years since El Salvador has gone to a World Cup,” pointed out Perez. “Psychologically, we’ve got to be strong, like the USA team from 1990 was.”

Although he has only been in charge of the senior team for a few months, Perez has already made an impact, leading El Salvador to a respectable showing in the recent Gold Cup.

“No one expected us to do what we did in such a short time,” Perez said. “We went to the second round, which was important. From there, it’s a step-by-step process, making sure that the players not only have confidence, but believe in what we’re trying to do. We think that’s important. Especially now that we’re in the Octagonal, which is a little bit different from the Gold Cup, because you’re trying to reach the World Cup. Overall, it’s a whole different way of competing.”

Competing well is a key part of the change Perez is working to instill in his players, especially since his national team involvement was provoked, in part, by El Salvador’s humiliating 6-0 loss to the USA in December 2020.

“Because you love your country and your people, you don’t want to see them feel badly,” Perez explained. “So the motivation was, ‘What can we do, what can we create, so that when I leave, someone else can follow it and be respectful to the program?’”

One particular inspiration for El Salvador has remained so for decades, even as fans have despaired over poor performances. The pride of the country’s soccer is still the iconic Jorge “Mágico” González, the skillful, creative forward who helped lead the country to their last World Cup showing in 1982.

“Our country has produced one of the top five players in the history of football,” Perez said. “Everybody in the '80s said he was so special.” 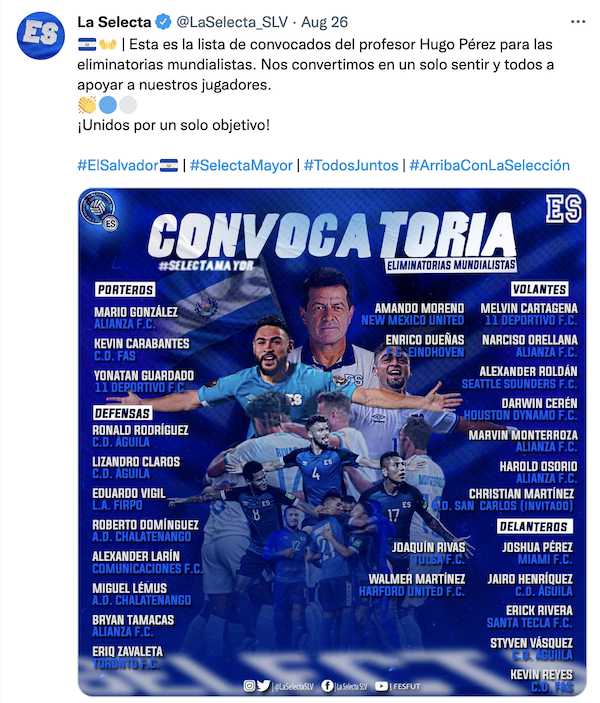 Though Perez isn’t intimidated by taking on the USA as the Octagonal games begin, he’s well aware of the difficulties presented by the current American squad.

“Right now, they have three teams that they can field very easily and all of them are going to be very good and competitive because of the type of players they have,” Perez said. “Some of them I coached when they were very young. In soccer, you never know how things are going to turn out. The thing that amazes me about the U.S. right now, is all the players, they're still young.

“We’re talking 22, 23, 21. That’s good for the U.S., to be honest with you. But I’m coaching now for El Salvador. As a player, getting the opportunity to play against the best of a country was always a goal for me. For us to play against the U.S., it’s going to be a good challenge for us. It’s only going to make us grow.”