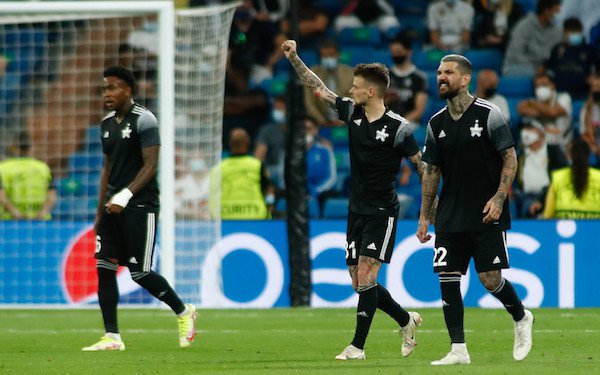 In the greatest upset in the history of the UEFA Champions League, Sheriff Tiraspol beat Real Madrid, 2-1 on Tuesday at the Estadio Bernabeu.

The contrast in the two clubs is startling:

Real Madrid, the leader of the Super League movement with a record 13 championships in the European Cup and Champions League, vs. Sheriff Tiraspol, which needed to win four qualifying rounds just to reach the group stage for the first time.

Sheriff Tiraspol is the Moldova champion but is situated in the breakaway republic of Transnistria, whose allegiances are to Russia. It is backed by Sheriff, a company founded by a pair of former Soviet police officers -- hence its name -- that has a monopoly on supermarkets and gas stations and controls upwards of 60 percent of Transnistria's tiny economy. (The average annual salary in the republic is about $2,500.)

Sheriff Tiraspol It isn't the first club from the far corners of Europe to have an impact in the Champions League. Shakhtar, which plays out of Kharkiv due to the conflict in Eastern Ukraine, has qualified for the Champions League group stage 11 out of the last 12 seasons thanks to the pipeline of talent imported from Brazil.

By contrast, Sheriff Tiraspol is a hodge-podge. The 14 players who appeared against Real Madrid represented 10 different countries from five of soccer's six confederations: Brazil, Colombia and Peru in South America, Greece, Luxembourg and North Macedonia in Europe, Ghana and Mali in Africa, Trinidad & Tobago in Concacaf and Uzbekistan in Asia.

Sheriff took the lead in the first half on Uzbekistan international Jasurbek Yakhshiboev's header. Real Madrid needed VAR to earn a penalty kick that Karim Benzema converted for the equalizer in the 65th minute.

The hero was 27-year-old Sebastien Thill, the oldest of three brothers who play for Luxembourg's national team. Olivier and Vincent Thill play for Vorskla Poltava in neighboring Ukraine. Their father, Serge, also played for Luxembourg in the 1990s.

Sebastien Thill scored the winning goal in the 90th minute with a blast into the top corner of the goal off a throw-in on one of Sheriff's rare forays into the Madrid end in the second half.

Thill ended up in Tiraspol almost by accident. He spent last season at FC Tamkov on loan from Progres Niederkorn in Luxembourg but the Russia club folded in May.

Thill is no stranger to European play. In 2017, he scored the winning goal for Progres Niederkorn in its 2–1 aggregate win over Scotland's Rangers in the first qualifying round of the Europa League. He admitted scoring against Real Madrid was just a little better.

"It's the best and most important goal of my career," he said. "That's for sure."

The win moved Sheriff Tiraspol into first place in Group D. It beat Donetsk, 2-0, in its opening match and now leads the group with six points.

A few weeks ago, everyone was wondering who was this new Sheriff in town. Now, the question is, can it reach the knockout round?