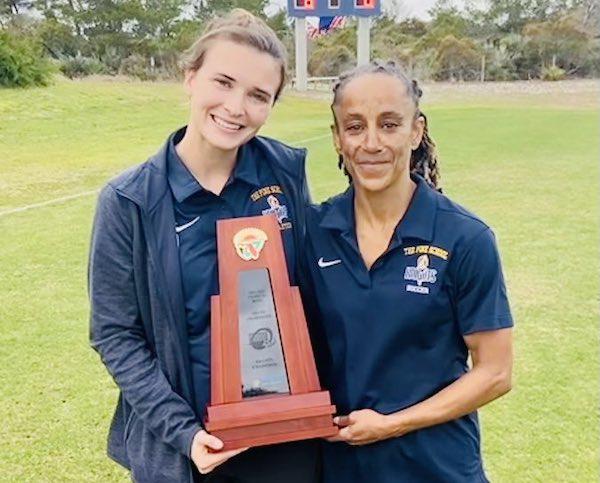 But not until she joined the Carolina Courage – with Marcia McDermott and Susan Ellis at the helm -- did Wilson play for an all-female staff.

A coach now herself, she’s part of another women-only staff. With assistant Courtney Marcum (in photo above to left of Wilson), their Pine School varsity team just won Florida’s 2A championship.

Wilson led the private school in Hobe Sound to a perfect 17-0-0 record. In the finals they took a 2-0 lead against traditional prep school powerhouse Canterbury, then surrendered a pair of goals. The Knights’ gamewinner came with just two minutes to go – “a laser into the side netting,” she says. 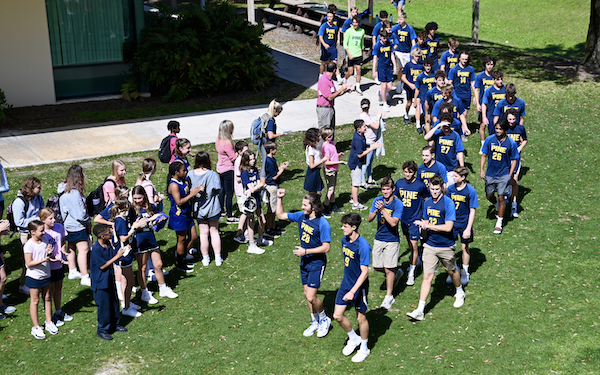 In her playing days Wilson, a defender, was more concerned with keeping the ball out of the net. But coaching was a natural, if unplanned, progression. Palladino got a call from a friend who needed a girls team coach at a private school in northern Virginia, near where Wilson had grown up. He urged her to try.

“I was 22. I had no experience with players who were not at a high level. It was eye-opening,” she recalls.

Her career path took a turn when the athletic director asked her to lead a conditioning class. Wilson’s work with an autistic basketball player impressed him. He offered her a full-time job as strength and conditioning coach, for every middle and upper school team. She kept her hand in the soccer world at night, training four different teams.

Working with athletes from other sports broadened Wilson’s horizons. But after seven years she and her partner moved to Florida. She did more conditioning and soccer coaching, then took the conditioning and girls soccer job at Oxbridge Academy in West Palm Beach. In 2017, her ThunderWolves won Florida’s 2A state championship. It was the first title in any sport for the private school, founded by William I. Koch. And, Wilson says, they did it on “a fraction of the budget of the football team.”

The Pine School has been a better fit, she says, with strong support for soccer. It’s just a bike ride away from the Hobe Sound Soccer Club, where she also coaches. The private school has a community feeling. The 34 players in her varsity and junior varsity program represent about one-quarter of the male high school enrollment. 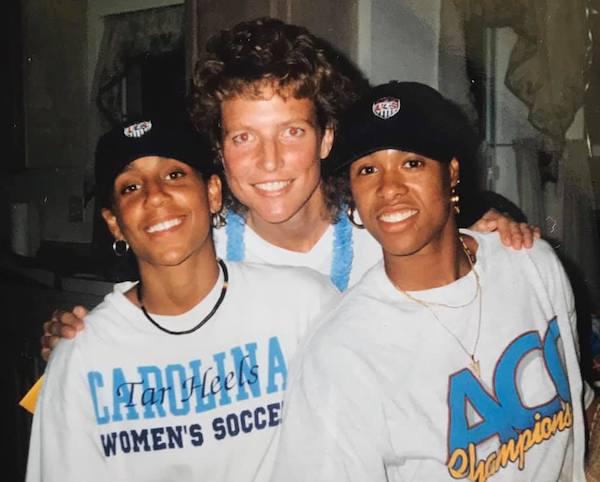 Staci Wilson (left), who earned 14 U.S. caps in 1996-96, with Michelle Alkers and Thori Staples. At UNC, Wilson was Soccer America Freshman of the Year in 1994, a year before teammate Cindy Parlow took the honor.

Wilson loves coaching high school boys. “I prefer having to rein them in a bit,” she says. “Sometimes they’re so much about being cool and bold. So I teach them how to be confident and poised – what a champion does, how to win and lose with class. Games can be very intense. They can’t get triggered. Sometimes winners just walk away.”

Her players like her, she says, because she is “honest and direct. I don’t give a lot of compliments. ‘That wasn’t so terrible’ is high praise from me.” As a former player, she knows that “the greatest athletes seek criticism. They don’t hide from it.”

Gender is less of an issue for Wilson, she says, than height (“some of them are twice my size!”). At 45, she is more self-conscious than earlier about being able to keep up – whether on the field, or with the latest trends.

But she does not try to be someone she isn’t. “Every player likes to see their coach as a person,” Wilson says. “My way is not to yell and curse. It’s to have high standards, and hold my players accountable. Looking them in the eye is more important than screaming.”

In 2020, her first year at the school, the Knights won the regional tournament. Last year the team was quarantined by COVID, and could not compete in the postseason.

The virus struck again midway through this year – but only the coaching staff. With her athletic director supervising on the sideline, Wilson delegated substitutions and strategy to the captains. They came through with a 3-0 win, against a tough opponent.

That was a big victory, on the way to a bigger one: the state championship. Anson Dorrance, Bill Palladino, Marcia McDermott – and all of Staci Wilson’s other coaching mentors – must be very proud.