Just how hard no World Cup for the USA in 2018 will be is evident in the results of the new Gallup poll on U.S. spectator sports, the first since 2013.

Soccer's popularity has tripled in the last decade and ranks fourth among all sports, picked by 7 percent of U.S. adults as their favorite sport to watch, behind football at 37 percent, basketball at 11 percent and baseball at 9 percent in the poll conducted Dec. 4-11. 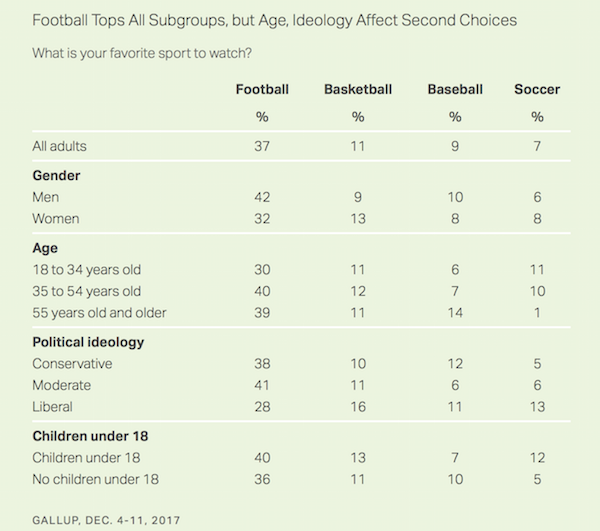 The 2 percent difference between soccer and baseball is the closest the fourth-place sport is to one of the big three in the last 20 years of polling and just the second time a fourth-place sport polled as high as 7 percent. (Auto racing was at 7 percent in 1997.)

As recently as a decade ago, soccer interest was steady at 2 percent, but it has climbed steadily in the last decade. For the first time in 2013, soccer was fourth, ahead of ice hockey. It has extended its edge over ice hockey to 3 percent.

Soccer's rising popularity is reflected in its appeal among younger Americans:

-- Soccer ranks tied for second among all spectator sports among 18 to 34 years old, tied with basketball at 11 percent, ahead of baseball at 6 percent.

-- Soccer ranks third among all spectator sports among 35 to 54 years old, at 10 percent, ahead of baseball at 7 percent.

In all the subgroups, soccer ranked highest among "liberals" with 13 percent interest and lowest at 1 percent among 55 years old and older.