How to Retain Referees (Part 1)

We lose most refs in their first two years of refereeing with verbal abuse by the so-called adults in youth soccer, the coaches and parents, being the No. 1 reason for refs quitting. Following are ideas on how to retain more refs: 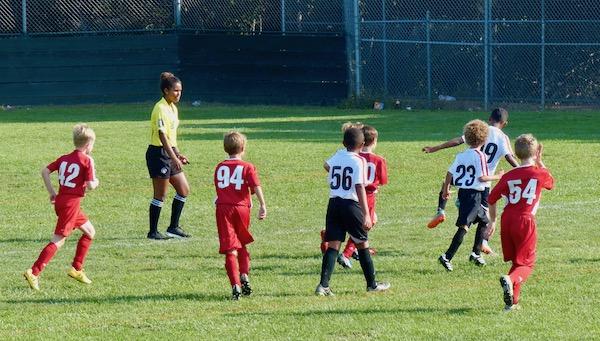 Start a Big Brother/Big Sister Program
In the Long Island Soccer Referee Association (LISRA), I’ve been a Big Brother to several refs who were just starting out. I went to a few games, offered some advice and listened to their complaints and questions when they phoned me after a weekend of refereeing. This program is helpful to help retain refs but, particularly as refs are overstretched as it is during busy weekends, it’s hard to get referees to volunteer to help new refs when they could be earning money reffing instead. One solution is to have a new ref be the AR for the experienced ref and the experienced ref to serve as AR for the new ref for a younger age group that would hopefully be a less challenging game. Or to fund the program so experienced refs earn some money by watching new refs. But this is only one piece of the puzzle to retain refs as leagues are very important in ref retention as well. Some ideas for leagues are below.

Start a Sportsmanship Program
I started refereeing travel team soccer in the Long Island Junior Soccer League (LIJSL) in 1980, the same year that Rocco Amoroso started the LIJSL’s Sportsmanship Program as he was concerned about the poor behavior at youth soccer games. So this was perfect timing for me as I was getting my feet wet in a league with a Sportsmanship Program. For every LIJSL regular season game ever since, the match referee grades each team on the conduct of players, coaches and spectators, overall game conduct and player appearance. The teams accumulating the most points in each division receive the LIJSL Sportsmanship Award in a ceremony after the season and they proudly wear the Sportsmanship Patch they receive on their shirt sleeves. This program is now so ingrained in Long Island youth soccer that many teams put as much energy into being sporting as in winning the game. Rocco, a U.S. Soccer Life Member, became like a Johnny Appleseed for sportsmanship, preaching its values across the USA and some leagues in the USA and even China and Ireland adopted the program. But most leagues still don’t have a sportsmanship program. Consequently, I would still much rather ref a LIJSL match than a game in other leagues as LIJSL teams generally are more sporting than other squads because of this great program.

Start a Scout Program
The East Hudson Youth Soccer League (EHYSL) had a different idea to control behavior and retain refs. In 2014, they sent out the Scouts! Every weekend, four to six Scouts are assigned to visit selected venues and observe plus “be a presence” at all the games at that venue. The Scouts are jointly selected by EHYSL and the Hudson Valley Soccer Referee Association (HVSRA) from longtime (10 years or more) referees, coaches and administrators active in youth soccer, and knowledgeable about its goals and procedures. The Scouts bring knowledge, of course, but also a fresh, objective view of the venue and the operations there, from coach organization to touchline behavior to referee performance. In their mandatory weekly reports, the Scouts give the EHYSL an excellent sampling at what is occurring at every field complex.

I was in the Hudson Valley for the State Cup finals when I observed a ref making basic mistakes during a small-sided EHYSL game as he missed obvious offside decisions and did not utilize club linesmen. Rich Ceonzo, an experienced ref wearing an EHYSL polo shirt, was the Scout at the field complex that day so I asked him to observe the ref at that field before people start complaining about what the ref is missing. Right after that, a mother came to Rich to complain that the opposing coach who her daughter’s team was playing intimidated the young ref their previous game so Rich had a full-plate to deal with and worked everything out by observing, advising and helping control what was happening on both fields. The Scout Program is funded by the EHYSL.

With the three successful programs above, is it any wonder that LISRA in the largest ref organization in Eastern New York plus the LIJSL and EHYSL are Eastern New York’s two largest leagues? I’m a New Yorker so these are the programs that I’m most familiar with that work but Soccer Americans can chime in below for what has worked in their area.

In my next article, I will write about other ideas for leagues on how to retain refs such as holding preseason meetings having refs and coaches in the same room, a marketing campaign to parents, formally thanking the refs after the season, and a firm arbitration program.

How to Retain Referees (Part 2): Start by getting coaches and refs in same room