England youth on the rise: The FA's Matt Crocker on how it happened and hopes for the future

England may be home to the world’s richest league, but that hasn’t translated into national team success. It has not won a major title since its only World Cup win, on home soil in 1966, and has gotten past the quarterfinals only once, in 1990.

But this year, the England’s youth national teams have had a remarkable run that the English FA hopes will lead to future senior national team success.

• England won a youth world title for the first time when it lifted the U-20 World Cup with an impressive undefeated run in South Korea.

• At the U-21 European Championship, England reached the semifinals, where it fell to Germany on penalty kicks after a 2-2 tie.

• England qualified for the U-17 World Cup (which kicks of next month) as UEFA runner-up after having reached that biennial tournament only three previous times since its inception in 1985.

Matt Crocker is the English FA’s Head of development team coaching. He joined the FA in 2013 from Southampton, where he served as coach in the club’s academy, which spawned stars such as Luke Shaw, Alex Oxlade-Chamberlain and Theo Walcott.

We asked Crocker for his account of how the English youth program has improved and also provide advice for coaches and parents of young players.

SOCCER AMERICA: How do you explain the recent success of England’s youth national teams?

MATT CROCKER: I think it’s a combination of a four-year project, a real clear vision about us wanting to be successful at the top senior level, targeting 2022 and podium finishes thereafter in terms of World Cups.

Working back, in 2012, 2013, when we first started this program, we built a clear strategy, put processes in place, put specific measurable targets for all of our teams, and created an aligned pathway from our youngest age group, under-15, through the senior team. 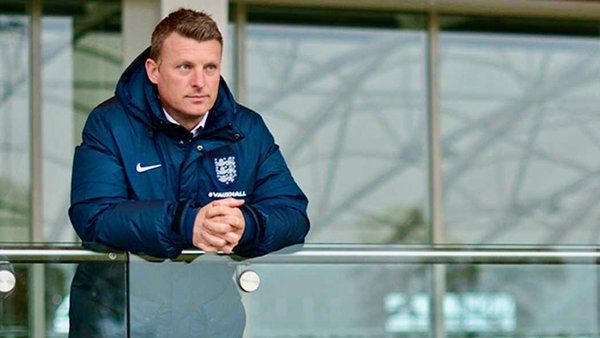 We’ve now got consistency in our environment both on and off the grass in terms of our coaching program, our system and style of play, how we’re recruiting, and what types of players we’re looking for to play in the various positions.

It’s not a fluke by any stretch of the imagination. We worked really, really hard in terms of getting consistency across all of our age groups. It’s a combination of getting buy-in from our staff, and also the players, and massively supported by the clubs, who helped us in terms providing the players to be successful in these tournaments.

SA: Was a change in playing style part of it?

MATT CROCKER: I wouldn’t say a change in playing style. Obviously, we have our DNA [Love the ball, love the game: Age-phase priorities] and our “in and out of possession” principles of what we want our teams to look like and the way we want to set ourselves out.

However, I just think it’s more to do with consistency and also focus. The focus was on us and what we were going to do, what we needed to do to win the game rather than be worried or scared of the opposition.

Obviously, we have to be aware of the tactical systems and key players of the opposition, but it’s more about us imposing our style on the opposition rather than us being fearful and potentially change the way we would like to play based on the opposition.

We have to be mindful, but it is more about setting the game plan about what we needed to do to win and sticking to our playing style philosophy in DNA.

SA: Are you confident that the young players in England who are currently having this success will excel in the future at the highest levels? What are the key factors for them to continue their ascent?

MATT CROCKER: Good question. First of all, I think we have some tremendously talented and gifted young players in this country.

So, the players who we’ve got now are as good as anybody’s in the world.

Proof of that: you’ve got the U-20 World Cup [Golden Ball MVP] Dominic Solanke. Jadon Sancho was the Player of the Tournament of the U-17 European finals. Goalkeeper Freddie Woodman was the [Golden Glove winner] at the U-20 World Cup.

All of a sudden, those benchmarks show we have the players who are capable of being among the top players in the world at those age groups. … 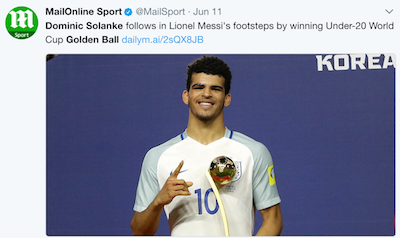 The elephant in the room is them getting the opportunities to play in first teams. Obviously, there’s no golden bullet to solving that issue, which is a 92 clubs and country solution. So, we all need to work hard to find what we can potentially change to give the youngest players opportunities as early as we can to play in the Premier League and Football League in this country, which is the final piece of the jigsaw to hopefully be successful at the senior international league.

SA: Is the financial success of the English Premier League a detriment to the development of young English talent, because clubs can buy so much top foreign talent? And is there satisfactory cooperation from EPL clubs with the FA's efforts to improve youth development?

MATT CROCKER: I think finally the Football League, the Premier League and the FA are all working together. I think it’s clear and recognized that all those governing bodies want more young homegrown English players in the Premier League teams. The Premier League is arguably the best league in the world with some outstanding world players.

The flip side of that coin is our young players at the clubs are having the opportunity to train and learn from the best, from those role models from all over the world, in terms of different styles of play, the technical and tactical abilities. But also from what those top players are like off the field, which has a massive positive rub-off effect on our young players.

However, we would all want to work together to find more playing opportunities for those young players in the Premier League, playing in full stadiums, playing at the highest level.

And certainly the three governing bodies are working really hard behind the scenes to ensure that those greater opportunities are provided to players going forward.

SA: What is your advice for coaches at the youngest ages?

MATT CROCKER: Recognize the role that you play, because the impact you have on those young players is great at the grassroots level and determines whether the talented players you might have on the team either fall in love with the game or fall out of love with the game.

So, the biggest thing is make sure the players enjoy the experience. Give them loads of opportunity to practice, to be put in game situations and really enjoy being around the game. Be a facilitator to provide the players opportunities to practice and play games.

Expect the players to be enjoying touching the ball 90, 95 percent of the time across a session. Give them opportunities to learn through the environment you create rather than correcting all the time.

SA: What is the biggest mistake that coaches make at the youngest levels?

MATT CROCKER: Over-coaching. To act like that Premier League coach on the sidelines trying to solve all the tactical issues in games.

SA: What advice would you give to parents who want their children to excel in soccer?

MATT CROCKER: Be supportive. Don’t see the game through your eyes. It’s their childhood. You’ve had your opportunity to be a player. Be around to support, nourish, encourage, and also make sure you’re there to listen.

Being a parent myself, I’ve got three teenage boys, all of whom play football. I empathize during that car journey home when they’ve been a substitute or they haven’t had a particularly good game. That is the time they need you most. Just remember, whatever you’re feeling frustrated-wise, they’re probably feeling a hundred times worse, so be there to support them through the difficult times and encourage them that they can put things right in the next game or next training session.

That’s the good thing about football, you’re never more than a couple of days from another opportunity to play again.

england, youth, youth boys, youth soccer
17 comments about "England youth on the rise: The FA's Matt Crocker on how it happened and hopes for the future".
Read more comments >
Next story loading